"Mr. Miller, did you realize that the periodic table is arranged in more ways than just atomic number?"

"There is a definite pattern that for the elements!!!"

These are just two of the many statements that students shared with me as they built models based upon electronegativity and ionization energy in class this week. 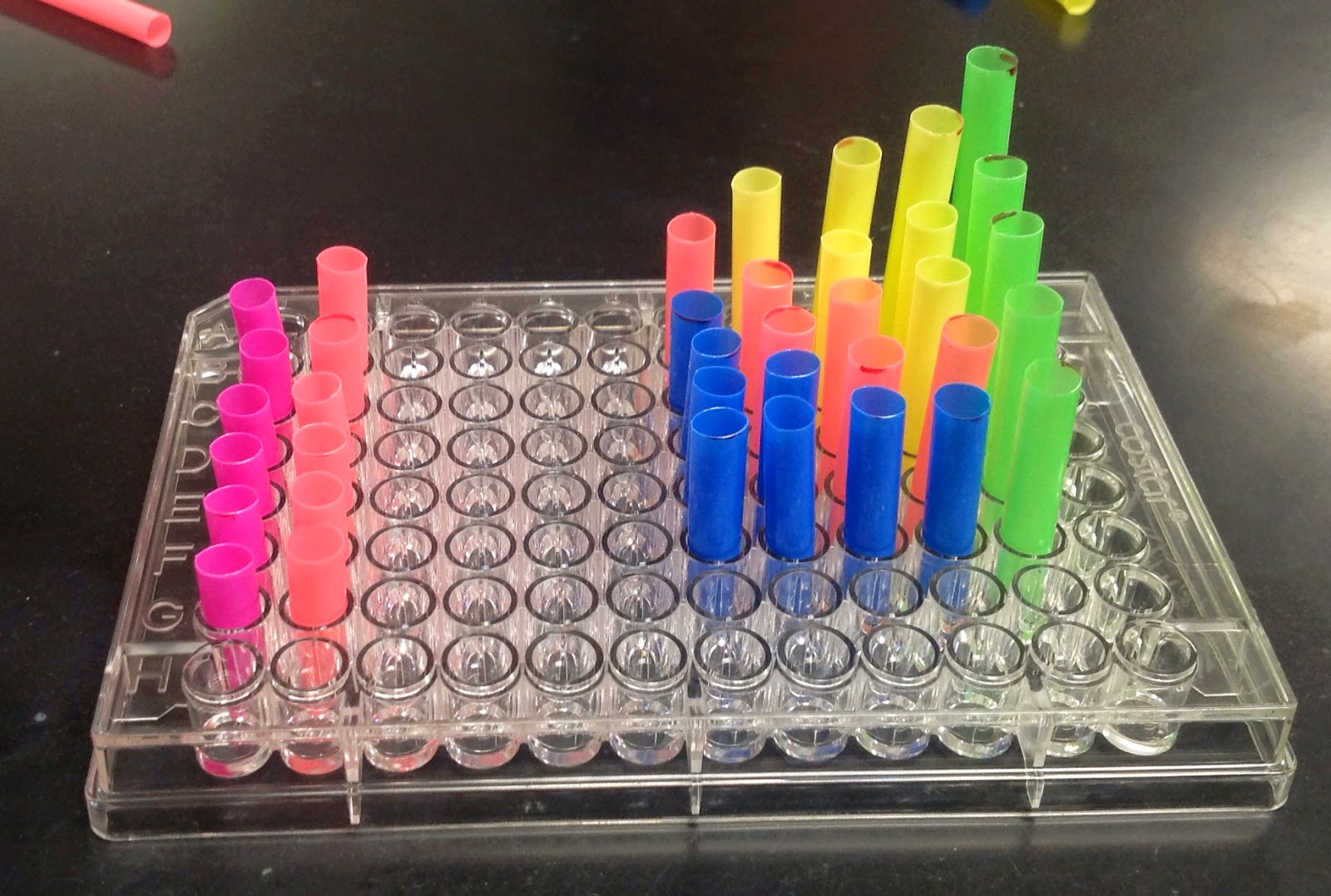 The Periodic Trends Lab (Electronegativity in 3D) is very basic and utilizes drinking straws (color straws @ Smart & Final) and a 96 well tray. Students cut straw lengths to match the values of electronegativity values.  As students build the model they can see they very distinct pattern of the periodic arrangement of the elements based upon electronegativity. 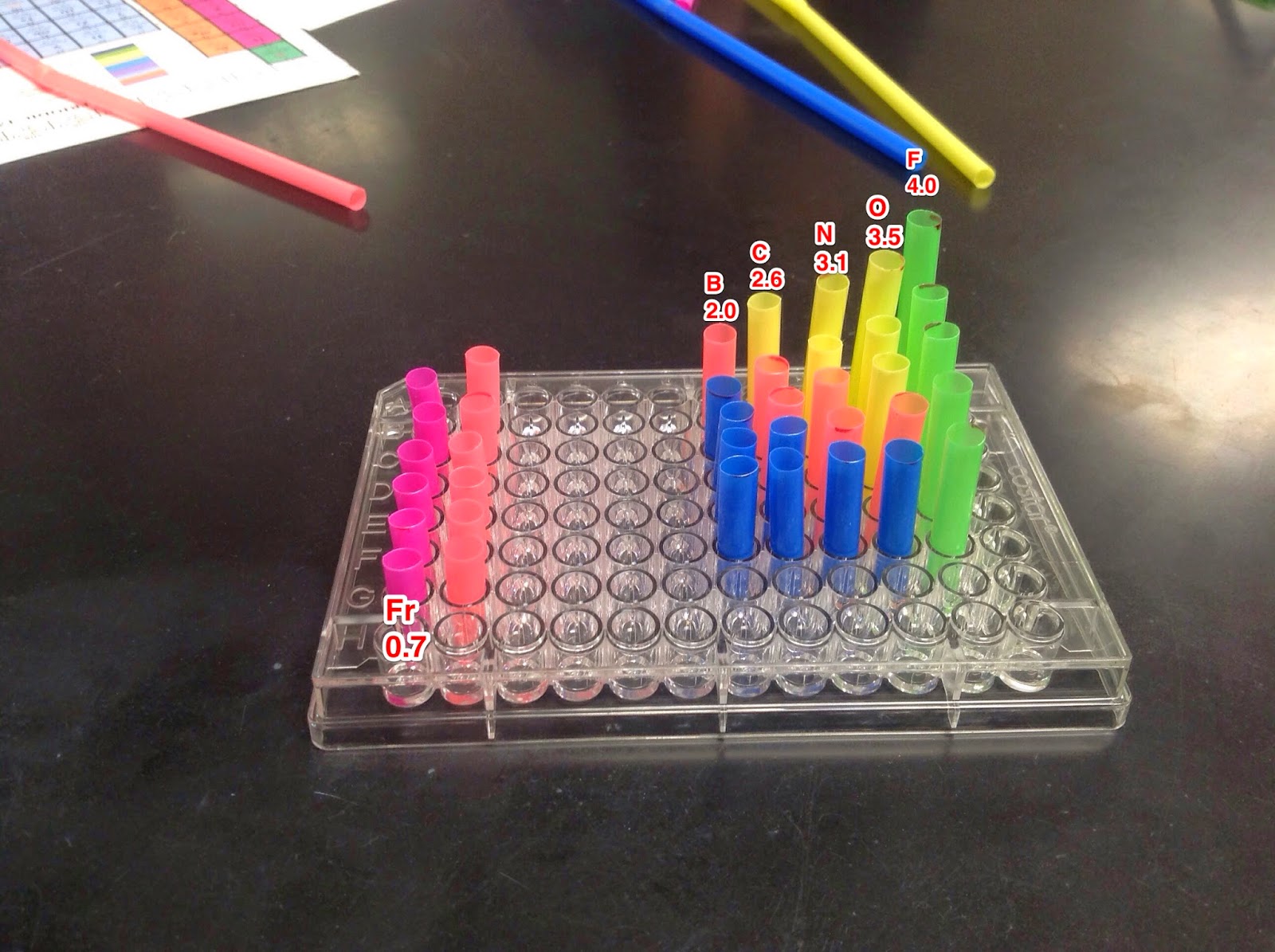 Students followed up the Electronegativity trend model by creating a similar model for Ionization Energy using a scale of 1 cm = 300 kJ. 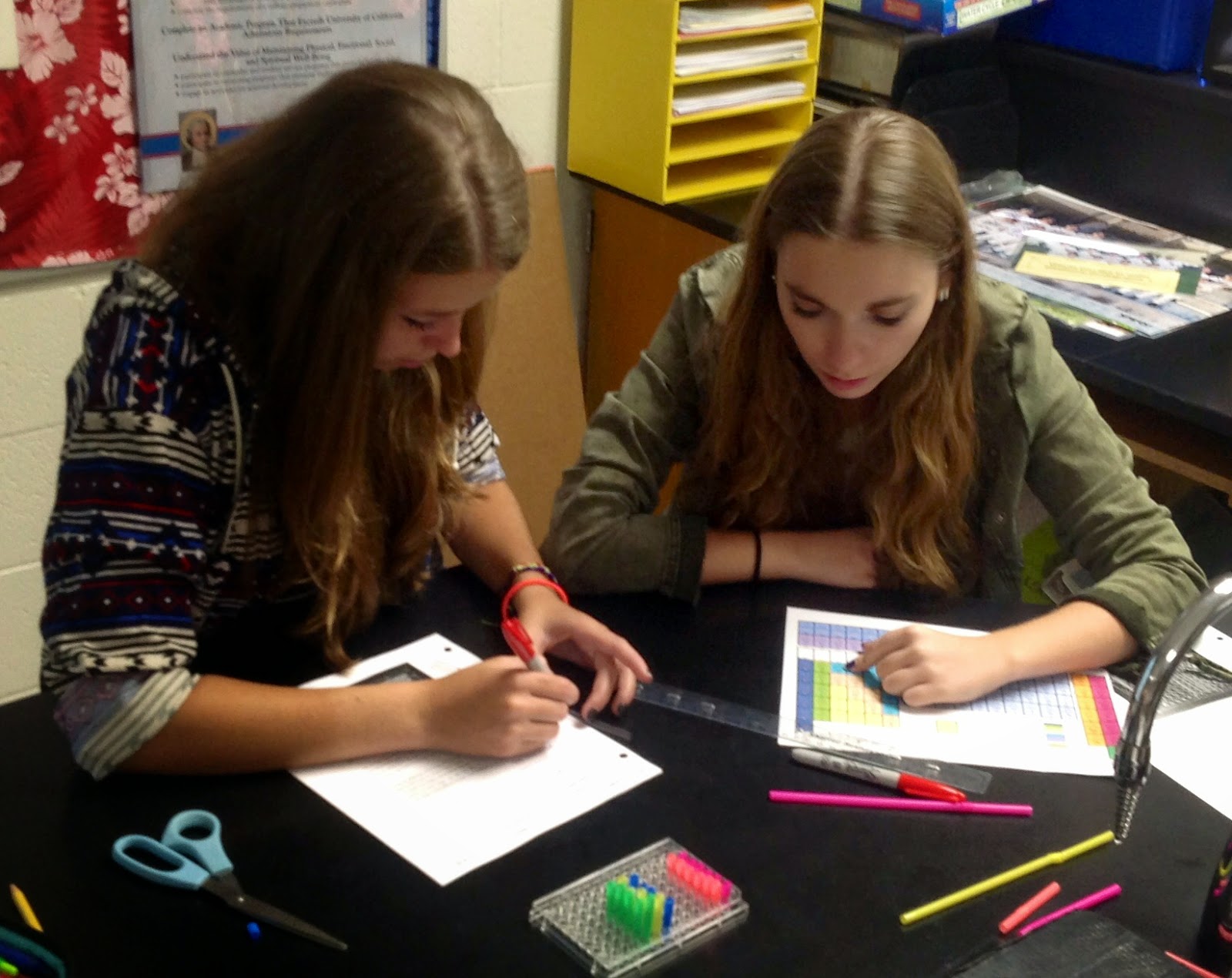 Posted by SMARTERTEACHER at 12:09 PM No comments:

Models can be a highly effective means of providing pathways for students to synthesize and apply the content they are provided.

In the Flipped Classroom I have adopted for my chemistry courses it has become an essential aspect of the curriculum, to use student developed models to transition from the media content they view at home to the application of the material in the classroom.

Models can range from simple to complex but I have found that it is the simplicity of a model that students can truly develop their own understanding and insights in a way that allows them to share with their peers and take ownership of their knowledge.

We recently used a Bohr Model template and clay to introduce the structure of the atom, the arrangement of subatomic particles and the intricacies of isotopes, and ions.

Students built models, took pictures on their iPads and annotated them using a an app called Skitch and then created iMovies about the isotopes of the first 20 elements. Although the Bohr Model has several flaws and is not a true arrangement of the electrons of an atom, building these models laid a solid foundation for students as they continued into the cloud model, electron and orbital configuration and eventually to Lewis Dot structures and the VSEPR models. 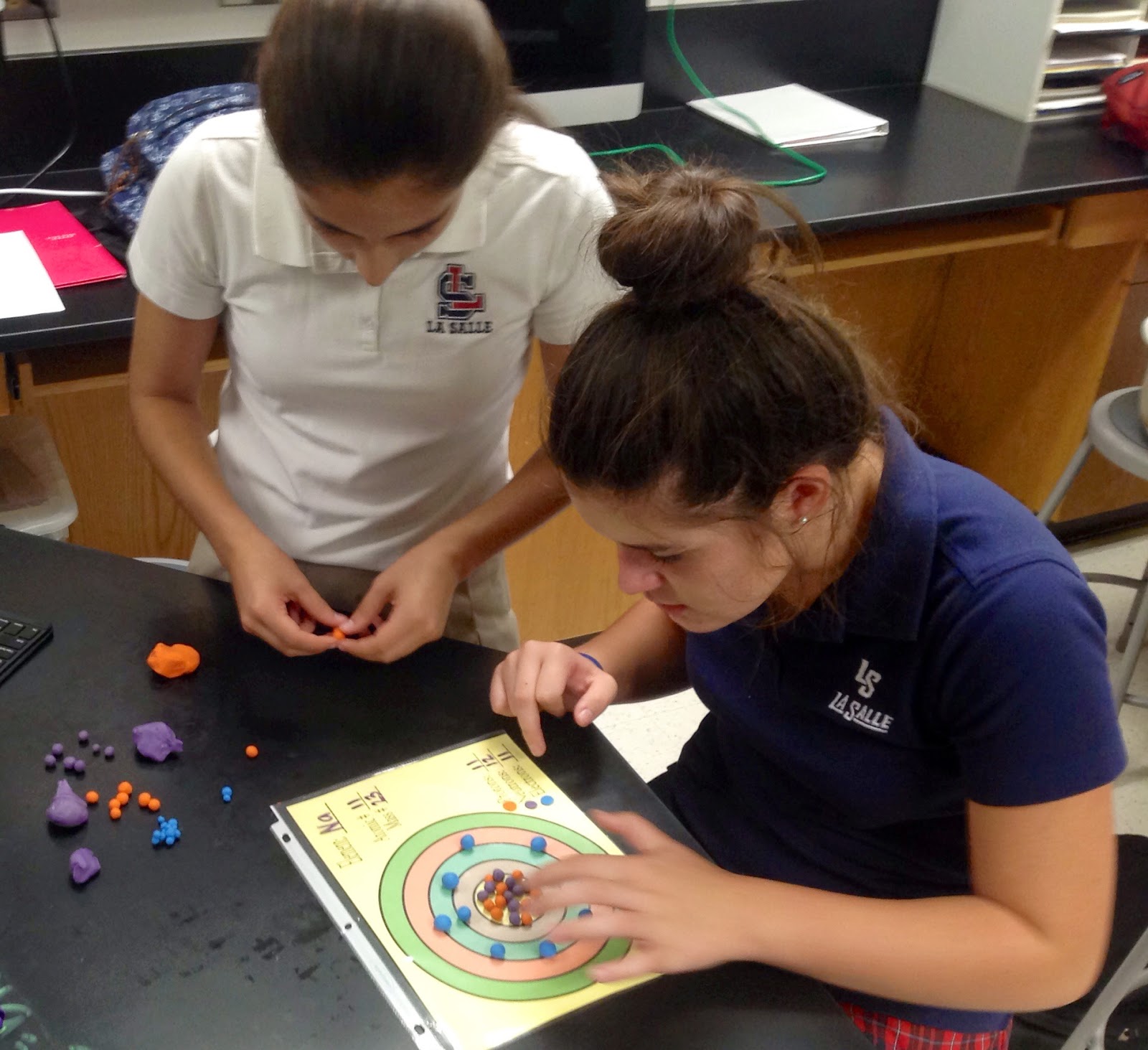 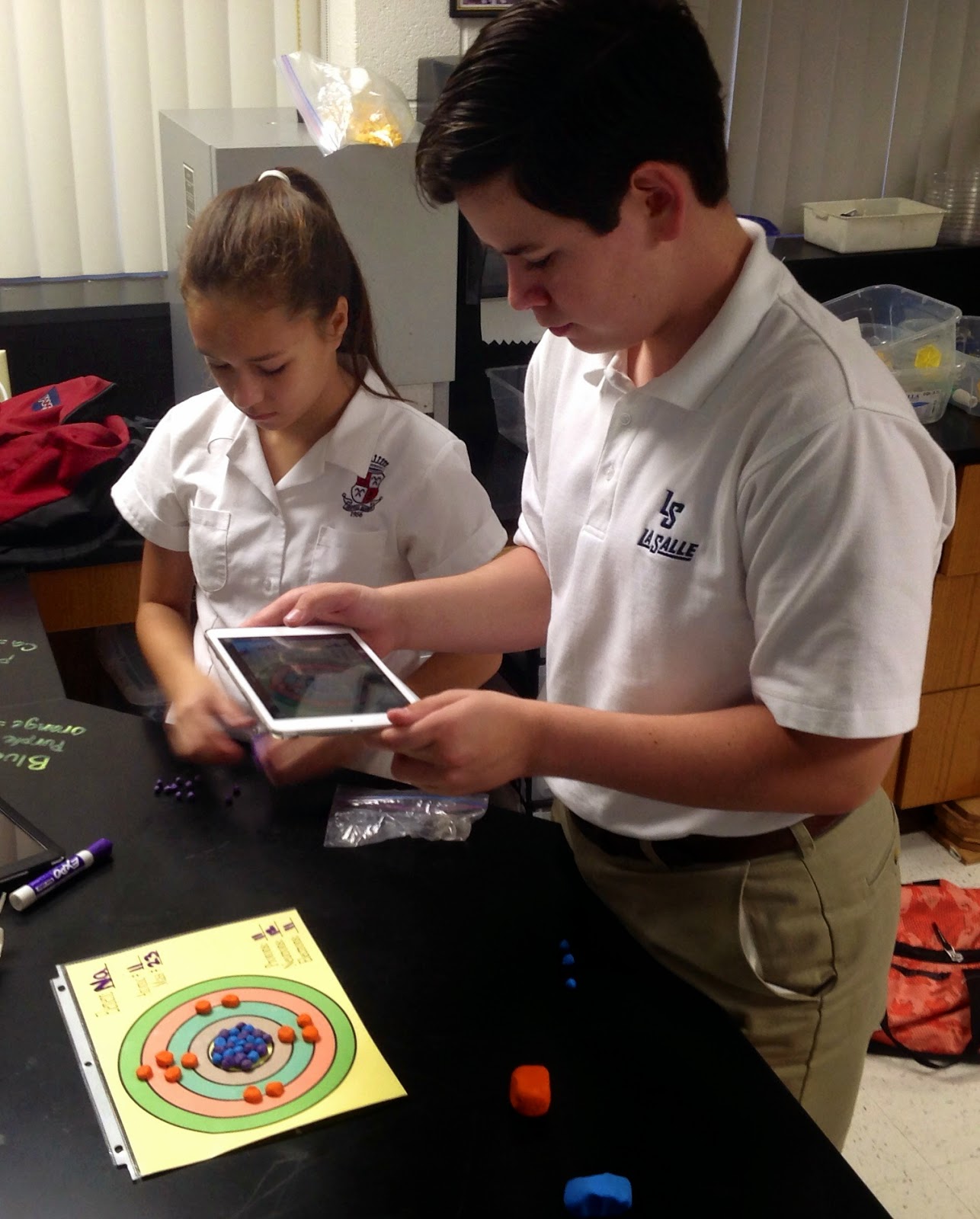 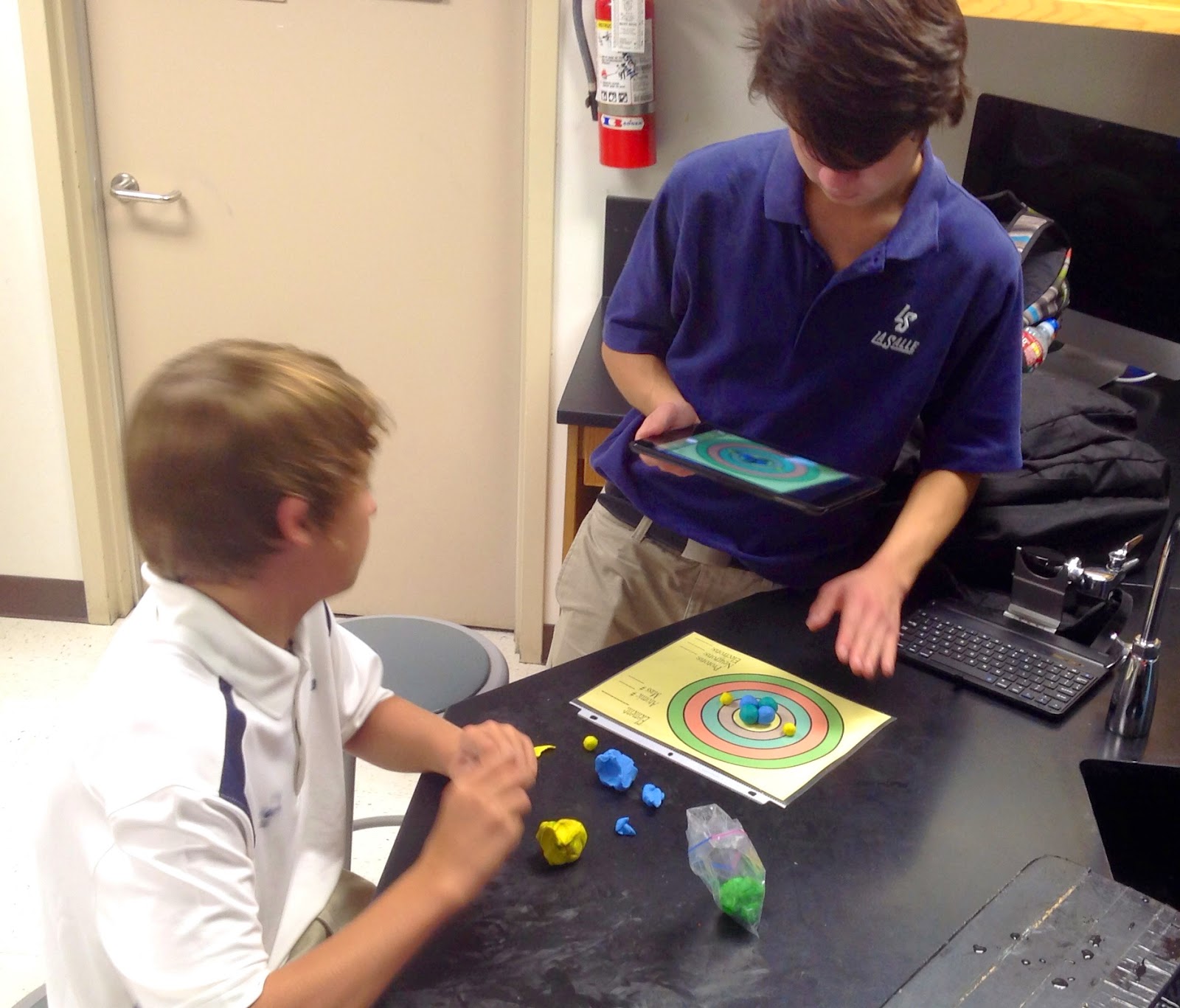 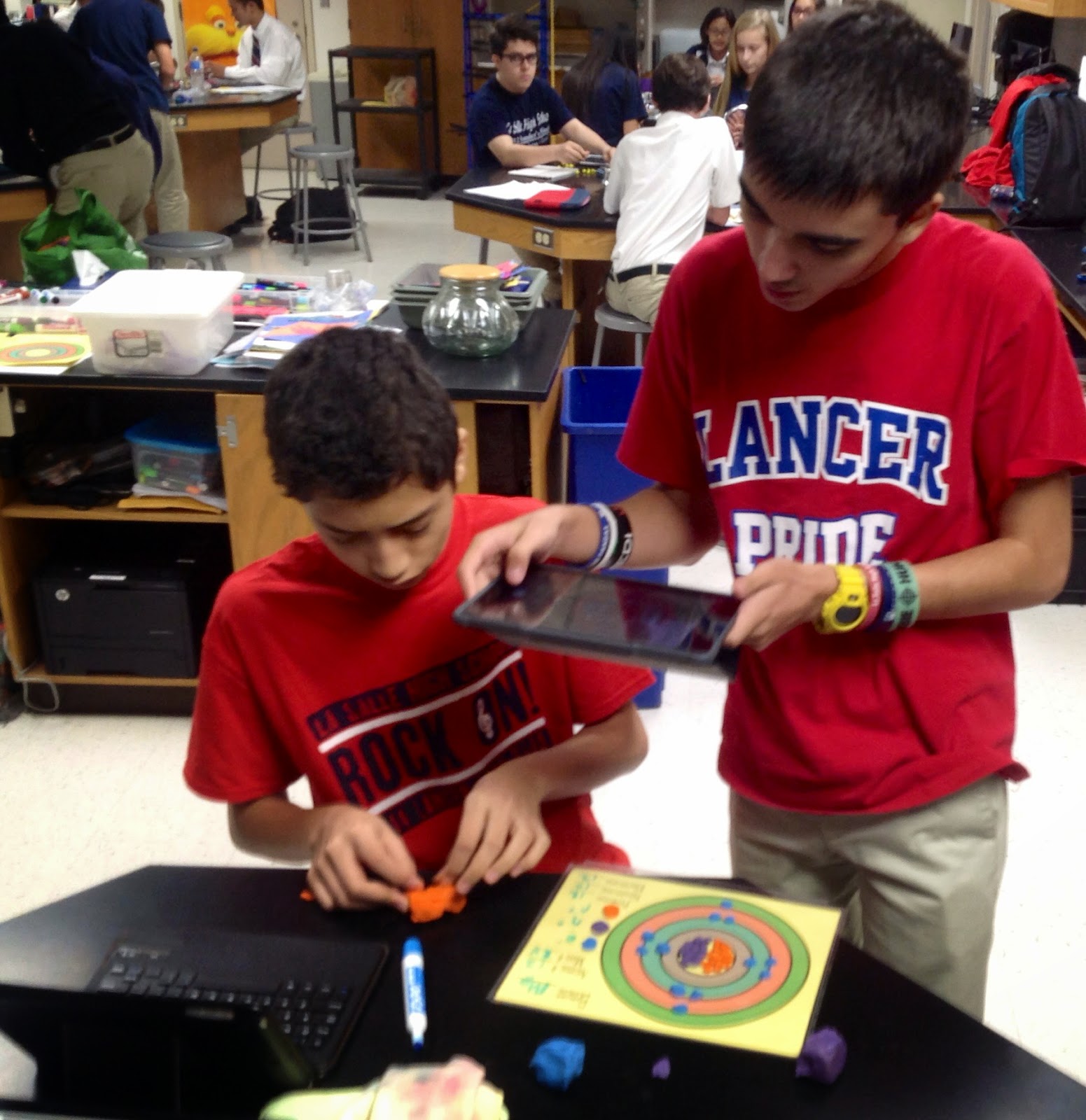 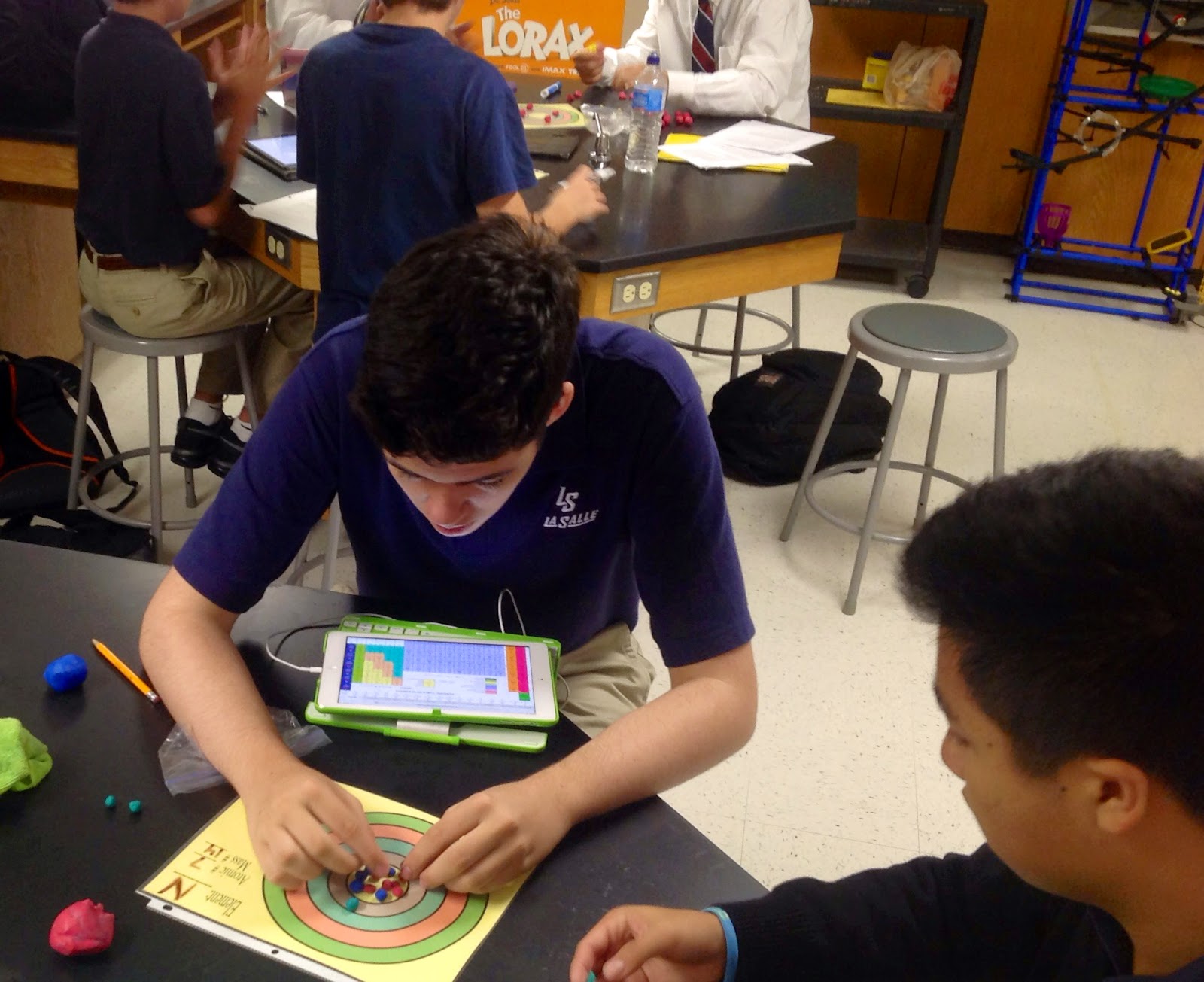 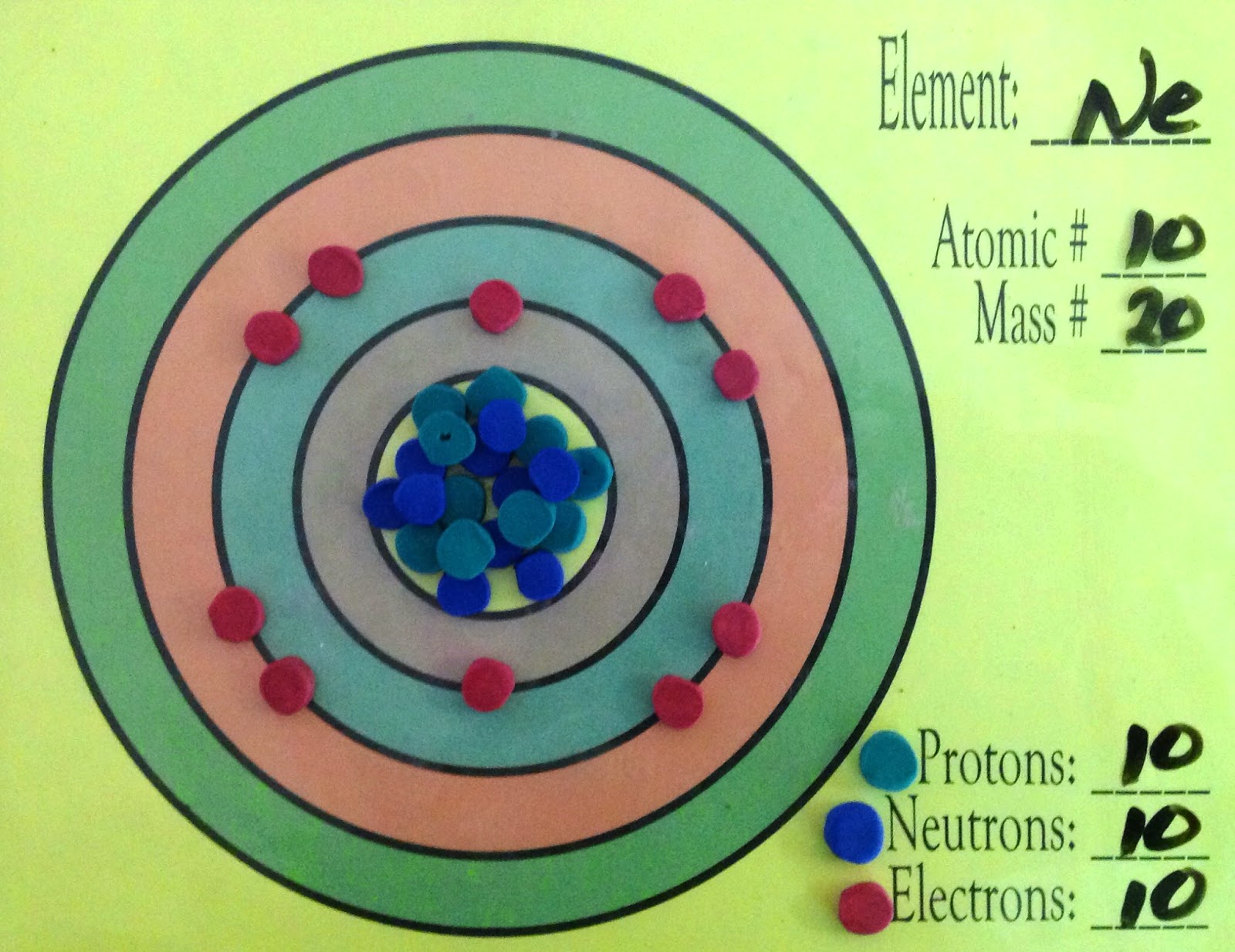 Prior to Flipping my classroom I would not have had time to have students do this in class and be able to have the more in depth discussions I engaged in with my students concerning the importance of electron arrangement, density of the nucleus, the neutron as the the defining value of the atom and the shielding effect created by the neutrons, all generated from student questions and discussions I overheard as I was fulfilling my role as "Guide on the Side" rather than "Sage on the Stage".

Posted by SMARTERTEACHER at 11:20 AM No comments:

You can't give something away unless first you own it yourself.

Even knowledge must be first owned before it can be shared.

One of the major themes in my "flipped" classroom stems from the work of Dr. Gary Philips and his work in Brain Research as part of the National School Improvement Project.

We remember 92% of What we Teach Each Other. One of the means we use in my classroom to synthesize material from the flipped lessons they complete on Sophia.org is to engage students in a process that allows them to teach each other.

Students work through prompts on lab tabletops with fluorescent dry erase markers to teach, re-teach and learn the material.  Students help each other to understand material by solidifying their own knowledge base through a model of TEACH2LEARN. 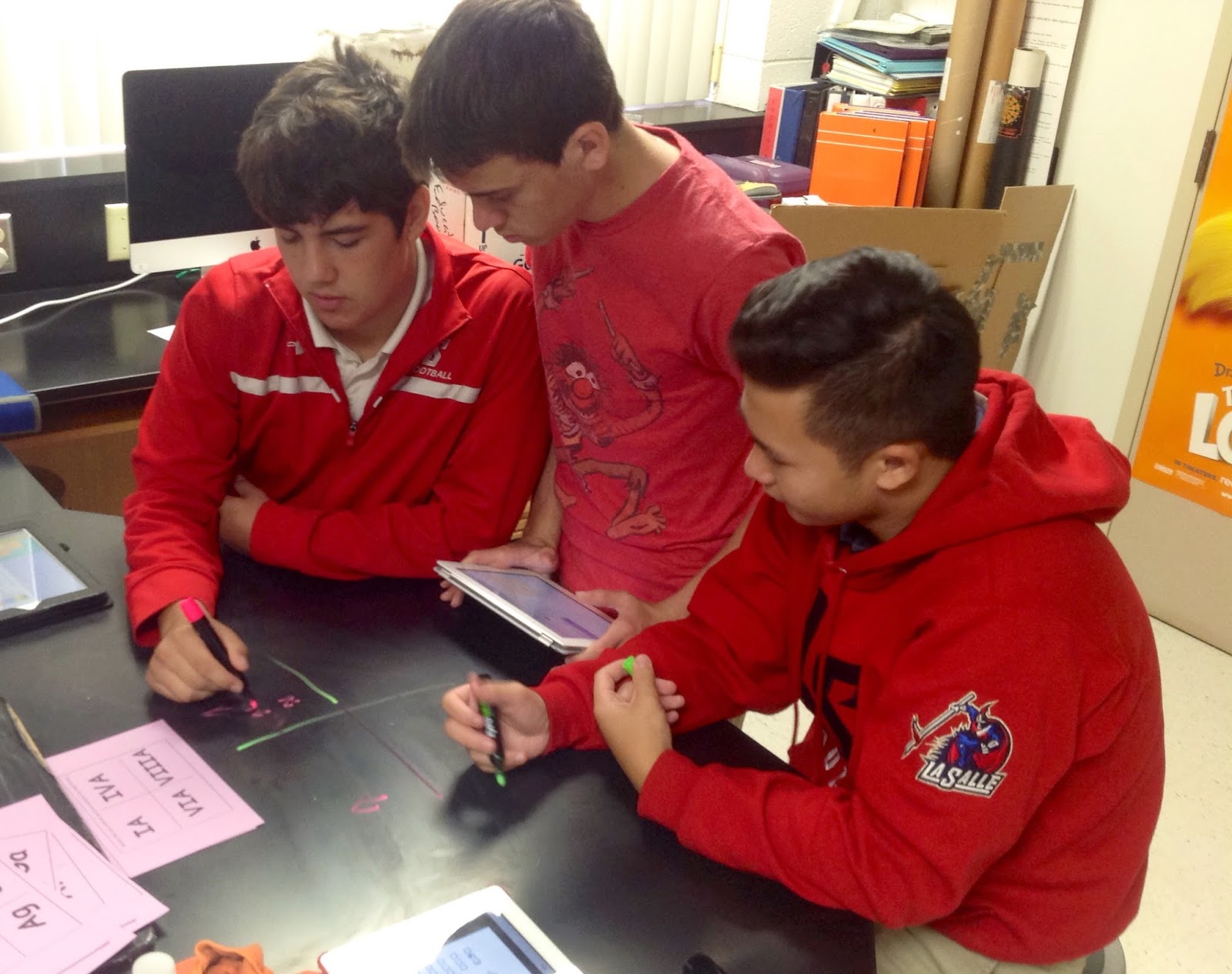 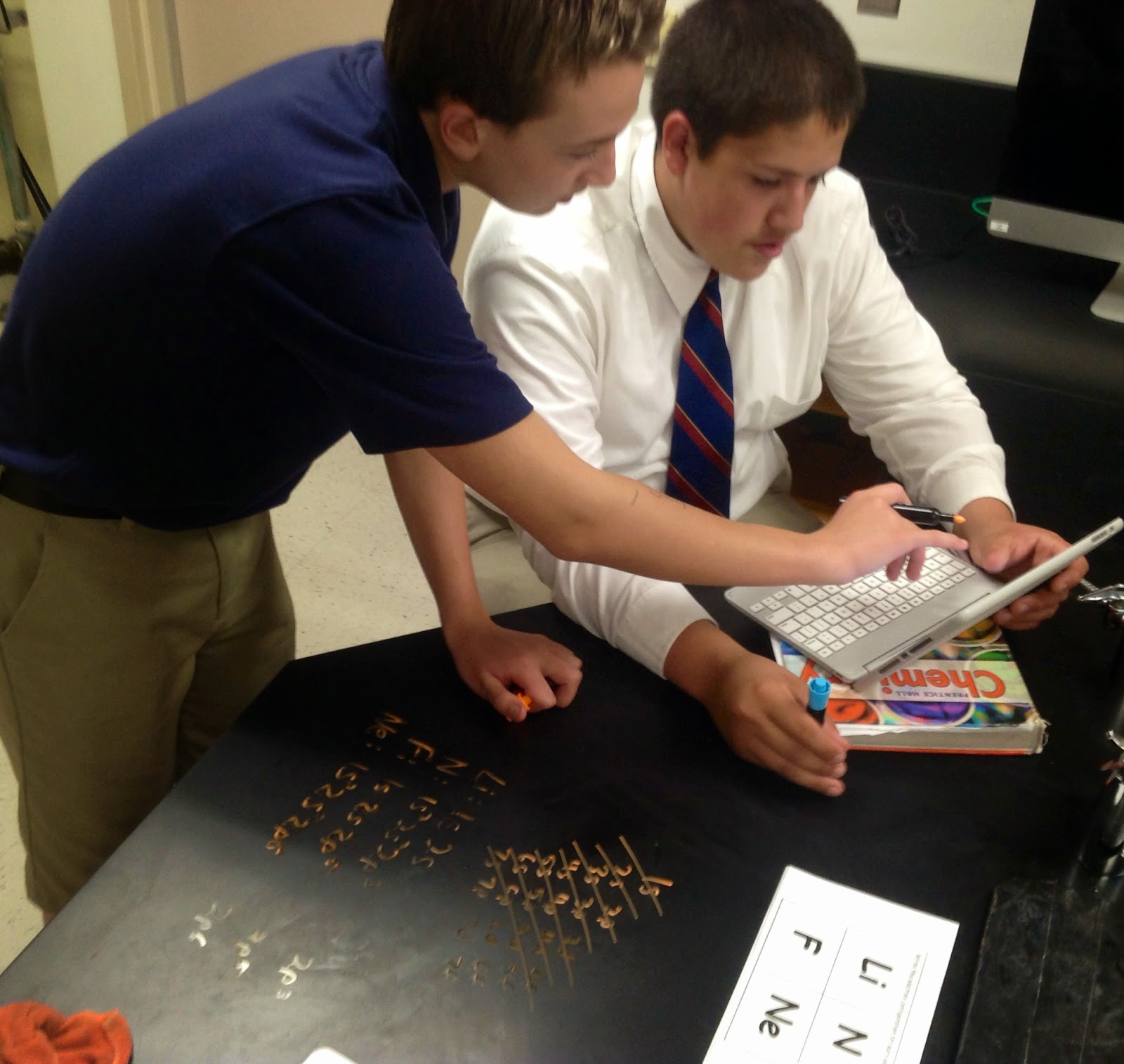 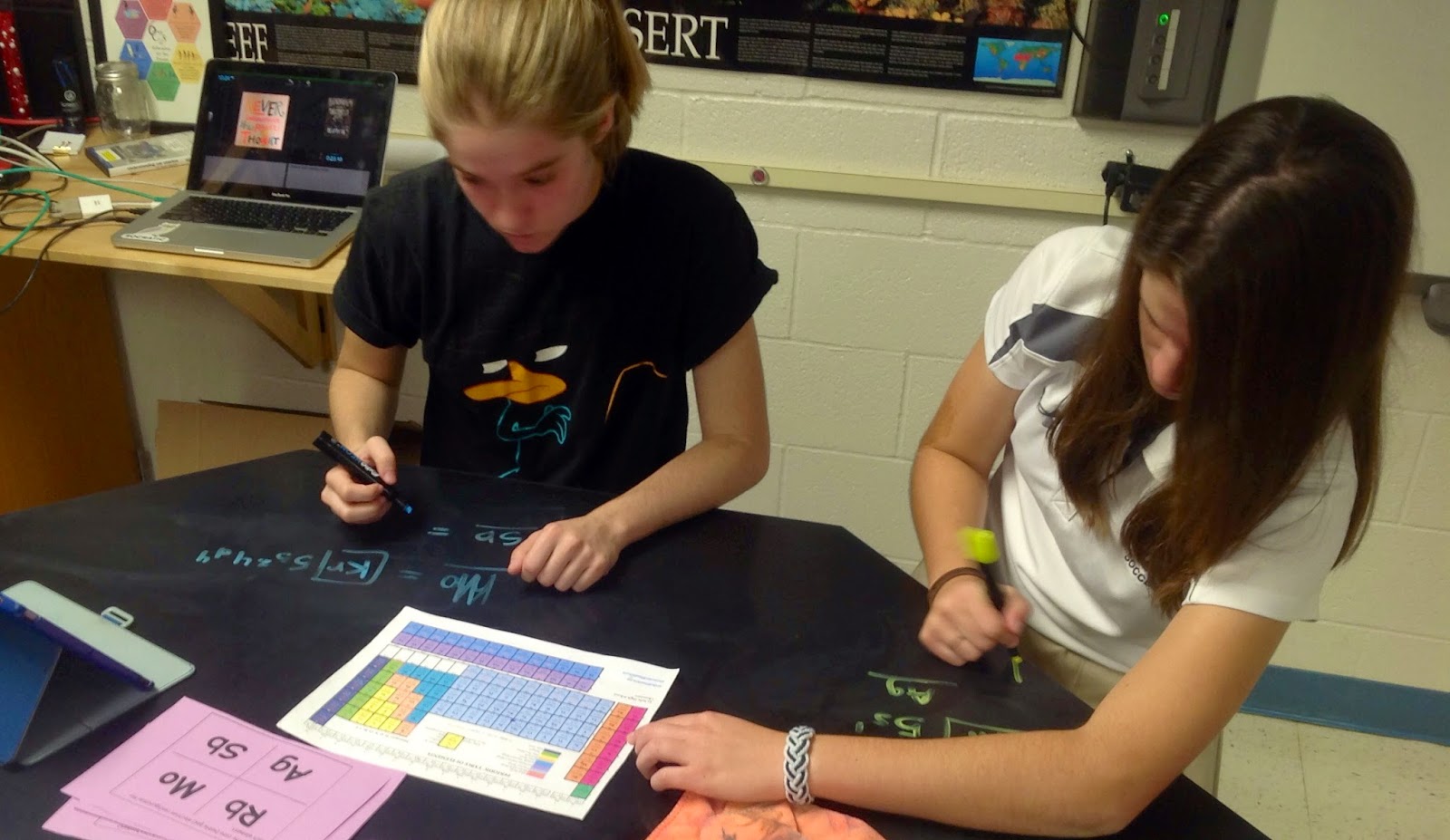 I take the role of Guide on the Side, providing prompts, to guide students who have drifted off track or who may be misguiding in their explanations. My role is to observe and evaluate student understanding as they teach each other. 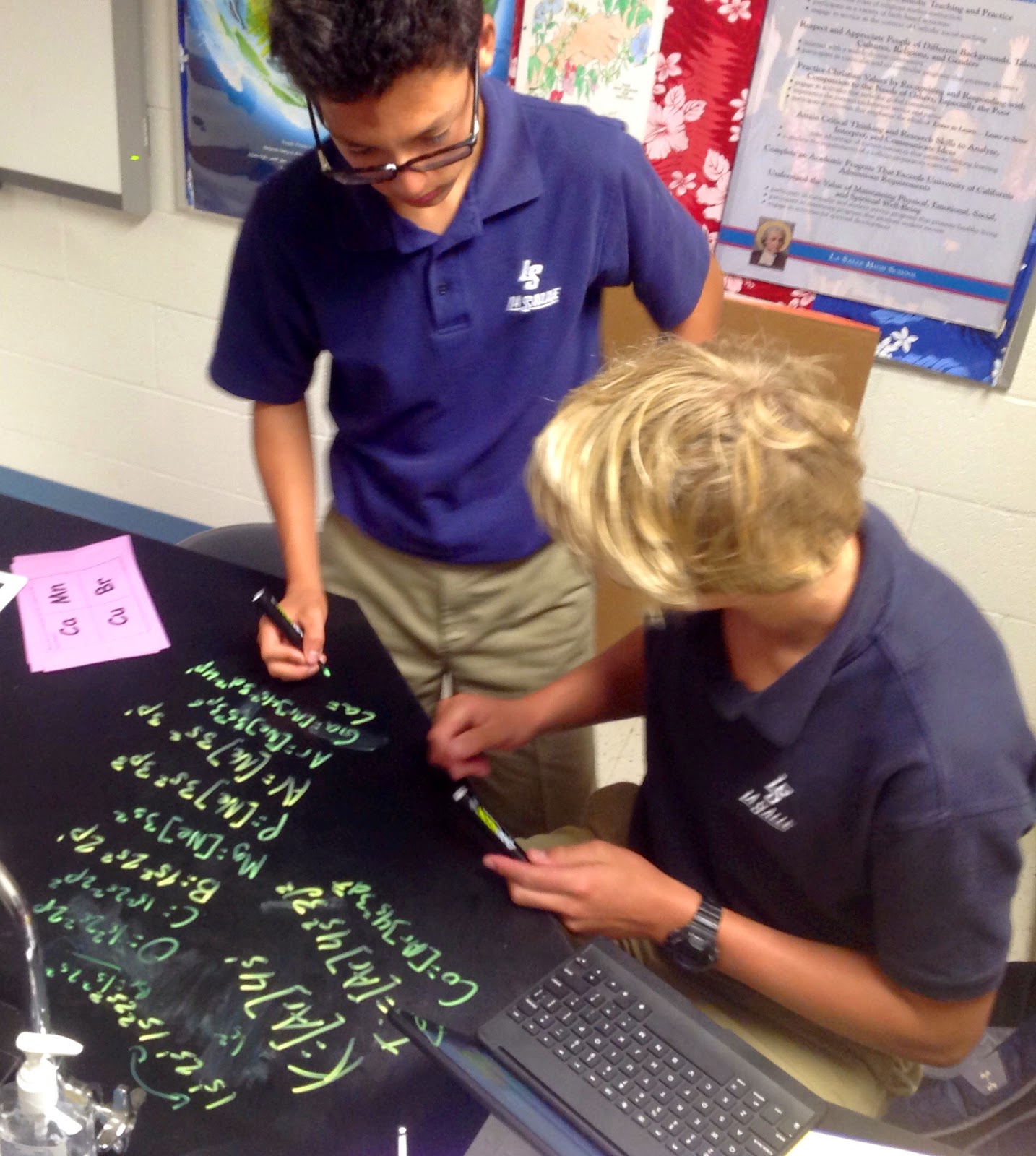 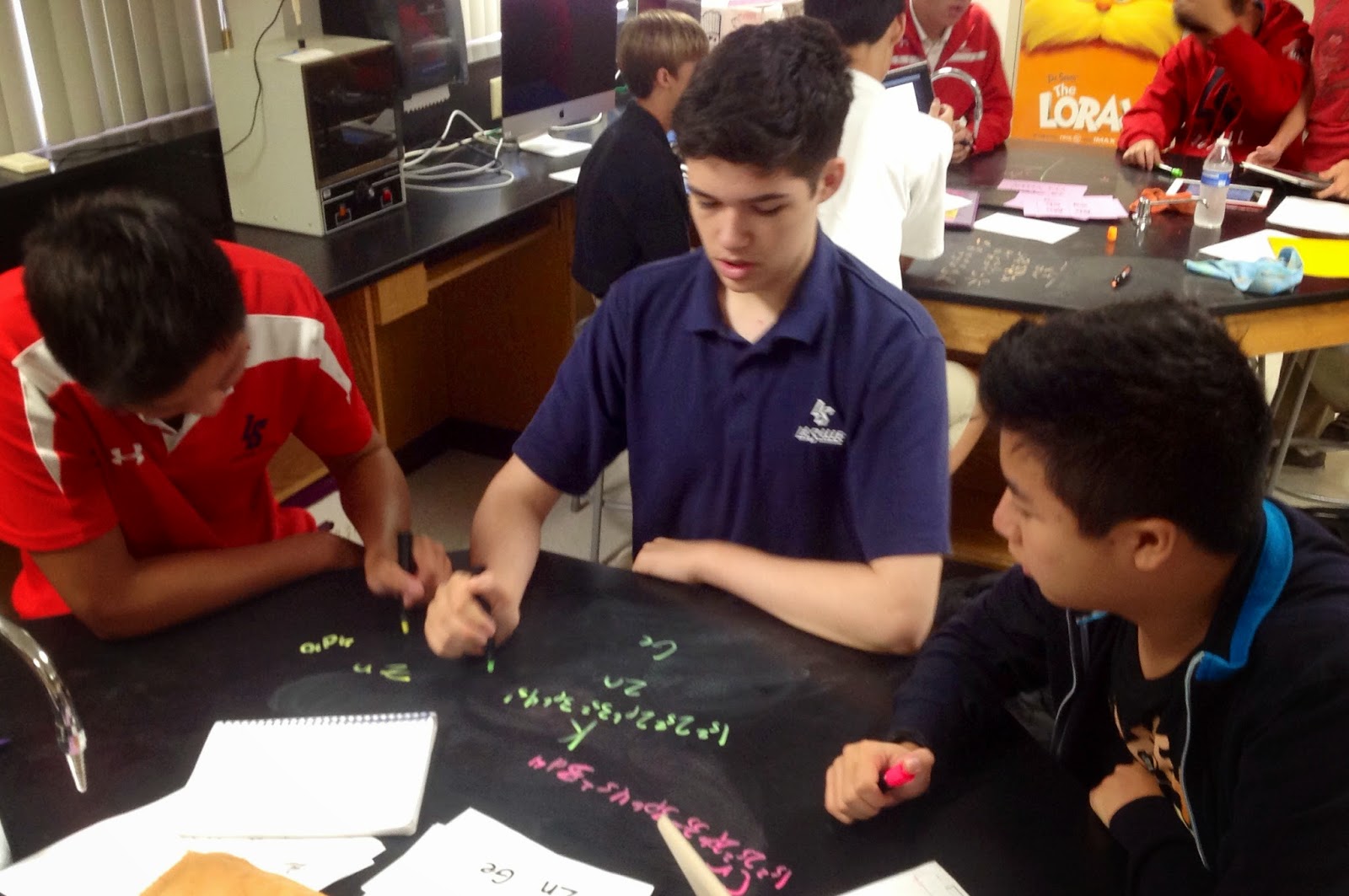 Posted by SMARTERTEACHER at 7:17 PM No comments:

As a means of presenting information the Pecha Kucha (chit chat) format provides an opportunity for students to combine images and words to present their ideas in a new way incorporating technology.

The Pecha Kucha format is based upon a 20 x 20 design of 20 images for 20 seconds. Students narrate their Pecha Kucha following the format made popular by PechaKucha Nights (PKN) all over the world.

This format provides an opportunity to authentically present an idea in a way that encourages them to incorporate imagery to coincide with their own words. Twenty seconds can pass in the blink of an eye or can seem like an eternity. Students need to evaluate what they want to say and how they want to say it in a meaningful manner while incorporating the meaning of an  image.  Five seconds of silence stands out like a sore thumb while rushing to fit an words into a 2-0 second window can diminish the effective ness of the message.  The 20 x 20 format comes out to a total of 6 minutes and 40 seconds which when planned and executed properly can brilliantly share the students passion for a particular topic, theme or idea.

My Environmental Science students created their own Pecha Kucha presentations to share information about Trash and Recycling.

Oh  and by the way,  we used each of the 6 C's in the process as well, Critical Thinking - development of a theme, Communication - digital and verbal, Collaboration - working in a group, Culture - effects on society, Creativity - blending images and words, Connectivity - uploading to YouTube.


Posted by SMARTERTEACHER at 10:41 AM No comments:

FLIPPING IS MORE THAN JUST WATCHING VIDEOS AT HOME

What is Flipping and Why?

I have flipped parts of many of my classes for several years now.  I have flipped parts of Anatomy, Biology and Chemistry courses.  This year I have committed to FLIPPING my entire Honors Chemistry Course.  I use SOPHIA.org to create tutorials and playlists of my videos (SMARTERTEACHER Sophia) which are available also available on You Tube. I use Screencast-o-matic to create my own video lessons, and supplement my own videos with videos from Tyler Dewitt, Paul Anderson (Bozeman Science), Brian Swarthout and Steve Spangler and Crash Course. I have now completed the first five weeks of the course and four chapters of the text. My students have engaged in labs, hands on activities and projects in every block this year (See Page).

I have put together a brief video to explain this to the parents of my students.


The Best Aspects of Flipping My Class


Student Focused Classroom
My classroom has become more them and less of me.  I spend more time engaged in authentic discussions with the students addressing their questions and understanding. I have spent very little time in lecture, directing the class and in disciplining students.

Authentic Application
My students have had ten class meetings and have done a lab, hands on activity or engaged in project based learning. (See Page)

Improved Use of Technology
We became a one to one iPad school this year and have converted from Moodle to BlackBoard for our LMS. I have increased the the interaction for my students and technology.
Student Ownership of Their Learning
Students learn on their time at their pace. Students are able to access Sophia playlists whenever the can wherever they are.

Increased Use of Formative Assessment
I am more aware of student understanding and application of material by having the time to authentically engage with students beyond simply sharing content. I am therefore, able to evaluate the learning process in my classroom for both my students and as an educator.

TIME! TIME! TIME!
Time in class to engage in the types of activities that engage students in the development of their skills for learning.


Posted by SMARTERTEACHER at 6:27 PM No comments: